Applecross has a rich cultural and religious heritage, and a strong Gaelic history. The Applecross Landscape Partnership Scheme seeks to conserve and promote the natural and cultural heritage of the peninsula. It’s a partnership of several local organisations who work together to encourage more people to access, learn about and become involved in the landscape heritage, and support the continuation of local craft and other skills by providing training opportunities.

Many consider Clachan Church to be an iconic element of Applecross’s rich built heritage. The present church was built in 1817 on the site of an earlier parish church, and belongs to the Applecross Trust. Much of the church’s international significance relates to its position within Applecross’s monastic settlement.

Works to restore the essential fabric and interior and improve access, create suitable interpretation, and develop facilities is now complete.

Situated near Keppoch House, the lime kiln is part of a small industrial complex comprising the kiln, a store or cart shed, and an access road and quarry. Built in the 1870s, it was last used in the 1930s for the production of quick lime, and has recently been restored.

Ventilated Hebridean barns can only be found in the Wester Ross parishes of Applecross, Gairloch and Loch Broom and are becoming increasingly rare, making the Hebridean Barns a unique resource. Historic Environment Scotland has indicated that the sites may be of national significance.

For more information on the above restorations and other projects visit Applecross Landscape Partnership (ALPS).

The name Applecross, which is intriguing but inaccurate, probably derives from misinterpretation of the Pictish “Aber Crosan”, which means at the mouth of the Crosan River. The Gaelic name for the peninsula, A’Chomraich (The Sanctuary) dates from 673 AD, when St. Maelrubha established a monastery and surrounding sanctuary at Clachan, second only to Iona in terms of religious importance.

Archaeological digs at Sand have placed an ancient settlement there at 7,500BC (9,500 years ago), making the peninsula one of the earliest known settlements in Scotland.

Maelrubha was born in Londonderry on 3rd January 642, and sailed from Bangor to Scotland in 671 to found a new monastic settlement. Two years later, he reached Abercrossan, and realised he had finally discovered the site he wanted. He established his monastery, declaring the area within a six mile radius a sanctuary.

Today, Applecross still provides sanctuary for those escaping the pressures of modern life. 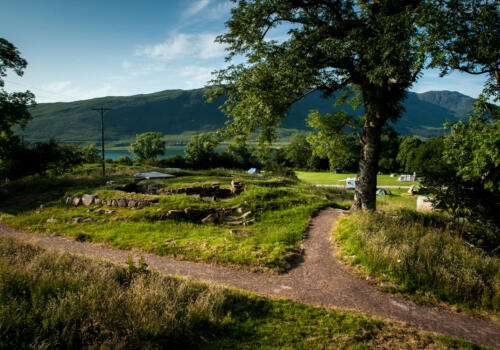 The first inhabitants of Scotland (the Mesolithic) arrived after the end of the Ice Age some 10,000 years ago. These people were nomads, moving their camps from season to season and living by hunting, fishing and gathering. Seas and waterways were particularly important to the early settlers, not only because they travelled by boat, but also as a source of food and raw materials.

As time progressed, Christianity became a formative influence, with the establishment of the monastery and sanctuary at Applecross.

A recent archaeological survey found that after the Ice Age, there were many people living across the north west of Scotland, forming a complicated network exchanging goods and raw materials.

Their remains are sparse and hard to find. Sometimes, however, shell midden dumps have been preserved which may contain surprising detail of Mesolithic life.

In the year 2000, Scotland’s First Settlers Project (of Edinburgh University) concentrated on the Applecross peninsula and the rockshelter site at Sand, where the team assessed an area of midden, made up of dry limpet shells, plus other shellfish and fish bones, as well as animal and bird bones.

They also discovered bone, stone and antler tools, plus fine shell beads and other, possibly jewellery-related items. The inhabitants of Sand were part of a network operating across the Inner Sound and further afield.

In 2005, Channel 4’s “Time Team” carried out an investigation on a structure thought to be an Iron Age Broch. As a result of local interest, the Applecross Archaeological Society was formed and annual digs took place from 2006-9. More recent project work 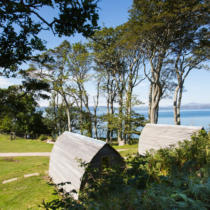 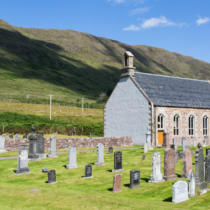 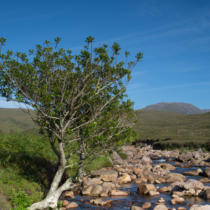 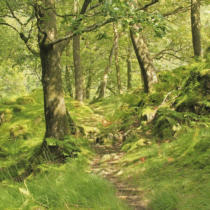 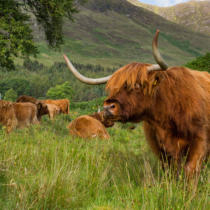